President Obama: “Any violation of Ukraine sovereignty would be deeply destabilising”

US President Barack Obama has warned Russia there will be “costs” for any military intervention in Ukraine.

He said he was deeply concerned by reports of Russian military movements inside the country.

Ukraine’s acting president has accused Russia of deploying troops to Crimea and trying to provoke Kiev into “armed conflict”.

Russia’s UN ambassador said any troop movements in Crimea were within an existing arrangement with Ukraine.
Passengers at the main airport in Simferopol were waiting for their flight to Istanbul when they were told airspace over the city was closed and the flight would not leave until the next morning at the earliest.

Some considered making the 500km (310-mile) trip to the nearest international airport, in Odessa.

Meanwhile, the airport car park was still being patrolled by heavily-armed soldiers in uniforms that gave no indication of where they were from.

News from elsewhere was no less alarming. The main television station was taken over by armed men who said they were from Russia’s Black Sea Fleet.

Reports came in that fibre optic lines connecting Crimea to the rest of Ukraine were either blocked or damaged.

If the mobile or internet connection goes down, it will be the most palpable indication yet of an emergency situation for the local people.

“Any violation of Ukraine’s sovereignty and territorial integrity would be deeply destabilising, which is not in the interests of Ukraine, Russia or Europe,” he said.

“It would represent a profound interference in matters that must be determined by the Ukrainian people. It would be a clear violation of Russia’s commitment to respect the independence and sovereignty and borders of Ukraine – and of international laws.”

He added: “Just days after the world came to Russia for the Olympic games, it would invite the condemnation of nations around the world. And, indeed, the United States will stand with the international community in affirming that there will be costs for any military intervention in Ukraine.”

Mr Obama did not spell out what any US response might be. However, the BBC’s Beth McLeod in Washington says the US is considering exerting economic pressure by withholding the deeper trade ties that Moscow seeks.

It is also considering boycotting a G8 summit hosted by Russia, she adds, although that is not until June.

US Republican Mike Rogers, who chairs the House of Representatives Intelligence Committee, said in a statement: “It appears that the Russian military now controls the Crimean peninsula.”

The White House said Vice-President Joe Biden called Ukrainian acting Prime Minister Arseny Yatsenyuk on Friday “to reaffirm the United States’ strong support for the new government and our commitment to the sovereignty, territorial integrity, and democratic future of Ukraine.”

In a TV address on Friday, Ukraine’s interim President Oleksander Turchynov said Moscow wanted the new government to react to provocations so it could annex Crimea.

He appealed to Russian President Vladimir Putin to “stop provocations and start negotiations”.

He said Russia was behaving as it did before sending troops into Georgia in 2008 over the breakaway regions of Abkhazia and South Ossetia, which have large ethnic Russian populations.

“They are implementing the scenario like the one carried out in Abkhazia, when after provoking a conflict, they started an annexation of the territory,” Mr Turchynov said. 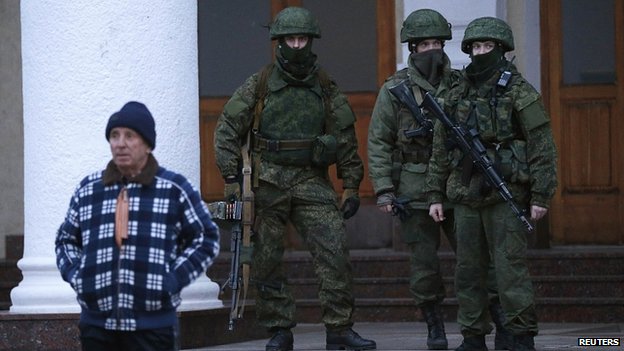 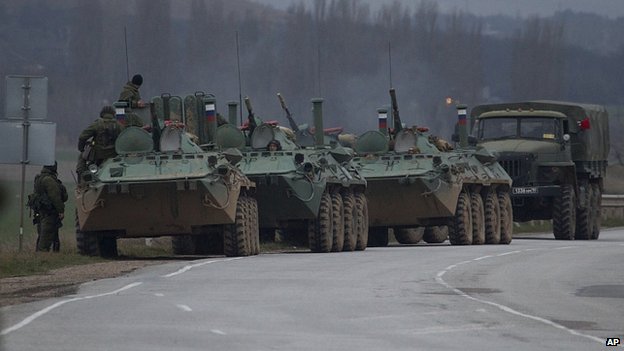 Russian armoured personnel carriers were seen near the town of Bakhchisarai, Crimea 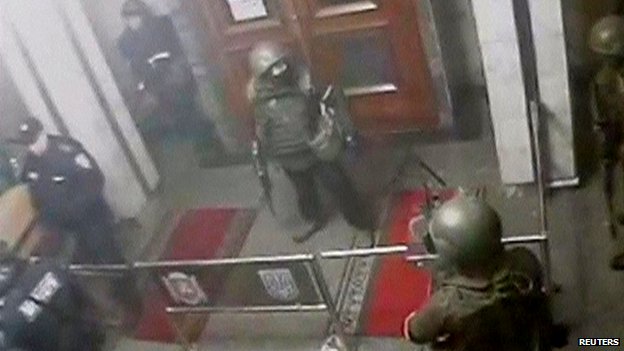 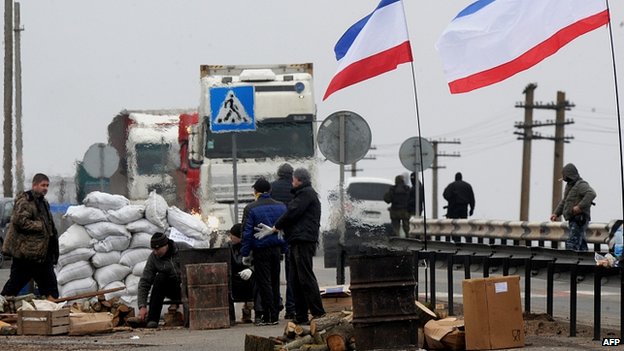 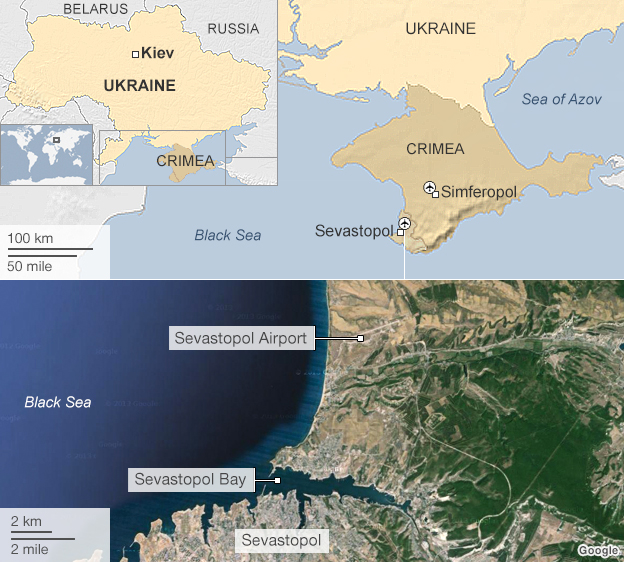 Armed men in unidentified military uniforms have moved in on Crimea’s parliament, state television building and telecommunication centres. They have also been patrolling airports in the Crimean capital, Simferopol, and Sevastopol, where Russia’s Black Sea Fleet is based.

On Friday, Russian armoured vehicles and helicopters were also seen in and around Simferopol and Sevastopol.

Flights from and to Simferopol were cancelled with airlines saying airspace over the peninsula had been closed.

However, Russia’s ambassador to the UN, Vitaly Churkin, said that any Russian military movements in Crimea were within Moscow’s long-standing arrangement with Ukraine on the deployment of military assets.

“We are acting within the framework of that agreement,” he said, after a closed-door meeting of the UN Security Council.

He did not give details of any Russian military deployment.

The Kremlin said President Putin had spoken of the “extreme importance of not allowing a further escalation of violence” during telephone conversations with Western leaders.

On Friday, Ukraine’s former President Viktor Yanukovych made his first public appearance since being ousted from office a week ago.

Speaking in Russia, he apologised for not “having enough strength to keep stability” in Ukraine and called his usurpers “young, neo-fascist thugs”.

Mr Yanukovych said he would “continue to struggle for the future of Ukraine”, but said he would only return if his safety could be guaranteed.

Mr Yanukovych is wanted on suspicion of mass murder following violent clashes between police and protesters last week that left more than 80 dead.

Ukraine’s political crisis began in November when Mr Yanukovych rejected a trade deal with the EU in favour of a similar agreement with Russia.

The move brought thousands of Western-leaning protesters out on to the streets calling for his resignation and closer ties with the EU.

Since he was deposed, tensions have shifted to Crimea where the majority of the population are ethnic Russians.