The President, Goodluck Jonathan, has ordered the sack of all resident doctors in Nigerian hospitals.

The sack was contained in a directive by Mr. Jonathan to the Federal Ministry of Health to suspend all residency training programme for Nigerian doctors.

The directive was stated in an internal memo dated August 13 and signed by the Permanent Secretary, Federal Ministry of Health, L.N. Awute, to federal hospitals.

Mr. Awute said the president’s directive was given following an appraisal of the challenges facing the health sector.

He said the Minister of Health, Onyebuchi Chukwu, has also directed that “letters of termination of residency training” be issued to all affected resident doctors in hospitals immediately.

The memo asked the management of all public hospitals to take necessary measures to restore full medical services in the hospitals, even without the resident doctors.

In what appears to show the reason for government’s action, the permanent secretary said the hospital could employ part time doctors who must be of ‘good behaviour.’

“Note however, this is without prejudice to the employment of Locum Physicians on six (6) months renewable contract tied to productivity and good behaviour,” Mr. Awute said.

Such recruitments must, however, be “be approved by Mr. President through the Honourable Minister of Health.”

In his reaction, the President, National Association of Resident Doctors, NARD, Jubril Abdullahi, told PREMIUM TIMES that the president’s directive is illegal.

He said the decision shows that Mr. Jonathan yielded to the demand of the Joint Health Workers Union, JOHESU.

“The action of Mr. President is illegal because there are several Acts that recognize Residencies in Nigeria and his action speaks volume of the government’s decision to follow the dictates of the Joint Health Workers Union. This is one of the issues the union is asking for.

“Whatever the government have done in their reaction to the NMA’s strike means they are not ready for dialogue because while we are engaging them, they have resorted to this,” Mr. Abdullahi said, saying members of his association nationwide were about 16,000.

A resident doctor, who spoke on anonymity to avoid persecution, condemned the decision saying he was now officially unemployed.

The doctor, a staff of a teaching hospital, said a colleague of his had just sent him another circular ordering all resident doctors to surrender hospital property in their possession.

The circular, seen by PREMIUM TIMES, said the doctor’s salaries and allowances for one month has been paid in lieu of the notice as they ordinarily are not entitled to any salaries for the period they have been on strike.

“In compliance with this order, I am to regrettably inform you that your appointment in this hospital is hereby terminated forthwith,” the letter issued residents doctors in a teaching hospital in the South South region of Nigeria stated.

The Nigerian Medical Association, NMA, of which the resident doctors are members, has been on strike since July 1.

One of the demands of the NMA was that the Federal Government through the Ministry of Health should formalize and implement the report of the inter-agency committee on residency training.

The NMA also asked the FG to release a uniform template on the appointment of resident doctors and a funding framework for residency training established while overseas clinical attachment be fully restored and properly funded.

Resident doctors are doctors being trained to become specialists/ consultants in different fields of medicine. During their 4 to 5 years training to become consultants, they work in different government hospitals and make up the majority of doctors in teaching hospitals.

“Let’s see how this will work. Except they want to kill the teaching hospitals and the health sector in general,” another resident doctor told PREMIUM TIMES.

He explained that he believed the incessant strike by resident doctors and the NMA was what influenced the government’s decision but doubted that it would be effective.

“In our own teaching hospital, about 90 per cent of the doctors are resident doctors, there are few medical officers. So how can you sack 90 per cent of doctors in a hospital?” he asked rhetorically. 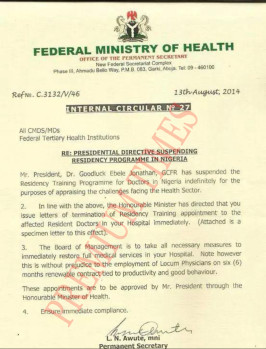