Barcelona forward Lionel Messi has won the Ballon d’Or award for the world’s best player for the fifth time.

Either Messi or Ronaldo, who became a three-time winner last year, have won the past eight awards.

England coach Mark Sampson was beaten to the women’s football coach of the year award by USA boss Jill Ellis.

Lionel Messi extended his record haul of world player of the year awards with his fifth after winning the treble – La Liga, the Copa del Rey and the Champions League – with Barcelona in 2014-15.

Portugal captain Ronaldo, 30, had scored 57 goals in as many games – including a record 16 Champions League goals – in 2015, but that was not enough to win him Ballon d’Or number four.

Barcelona striker Neymar, 23, was the first Brazilian to finish in the top three since Kaka won the 2007 award. He scored 45 goals in 62 games and is joint top scorer in this season’s La Liga with 15, level with team-mate Luis Suarez.

“It’s a very special moment for me to be back here on this stage, winning again another Ballon d’Or after seeing Cristiano win it,” Messi said.

“It’s incredible that it’s my fifth. Much more than anything I would have dreamed of as a kid.”

Women’s world player of the year

Carli Lloyd was emotional when accepting the award

USA’s World Cup-winning midfielder Carli Lloyd, 33, won the women’s world player of the year award after scoring a hat-trick in the final against Japan, including a sensational strike from the halfway line. She earned the Golden Ball for best player in the tournament.

Former Germany striker Celia Sasic finished second despite retiring halfway through 2015 at the age of 27. However in the first half of the year she was top scorer in the World Cup with six goals and won the Champions League with Frankfurt.

Japan midfielder Aya Miyama, 30, captained her country to the World Cup final, where they lost to the USA. She was third.

None of the shortlisted trio had won the award before.

Lloyd said: “It has been a dream ever since I started with the national team. Keep your dreams and just go after them.”

Real Madrid had as many players as Barcelona, four, in the world team of the year despite not winning a trophy.

Goalkeeper Manuel Neuer was German champions Bayern Munich’s only representative. The Premier League was the only of Europe’s top five leagues to not have anyone in the team. 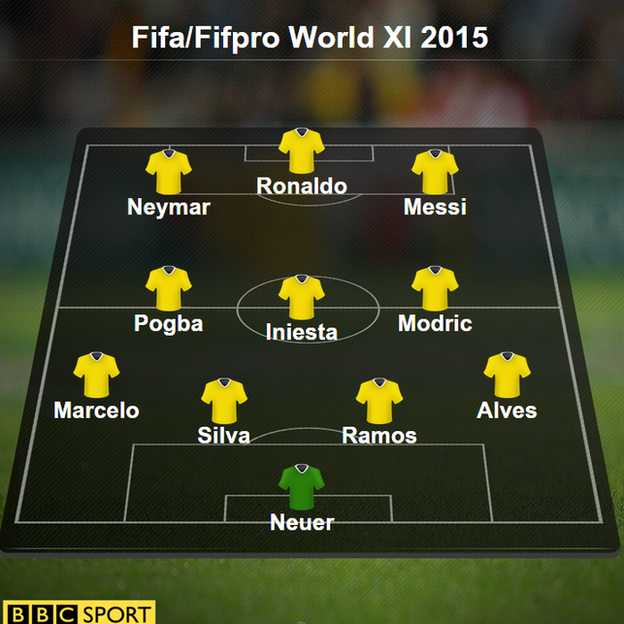 Barcelona coach Luis Enrique won the world coach of the year award after leading his side to five of the six trophies on offer in 2015, including the Champions League, La Liga and the Copa del Rey.

He beat Bayern Munich boss Pep Guardiola, who was second, and Chile’s Copa America-winning coach Jorge Sampaoli to the award.

United States coach Jill Ellis was named women’s football world coach of the year after leading her country to World Cup glory in the summer.

England coach Mark Sampson finished third with 10.68% of the vote after their third-place finish in Canada. Second place was Japan coach Norio Sasaki, whose side beat England in the semi-finals, but lost to USA in the final.

“It is a true honour,” said Ellis. “To Fifa, to our own federation, thank you for your belief, your vision and your investment in women’s football.”

Puskas award – goal of the year

There was no shortlist for this award.

How does voting work?

Journalists, national team coaches and captains vote for their top three in all categories, apart from the Puskas and fair play ones.

They select their first, second and third choice for each award, with five, three and one points given to each place respectively.

The Puskas award, for the “most beautiful goal” of 2015, is voted for by users of the Fifa and France Football websites.