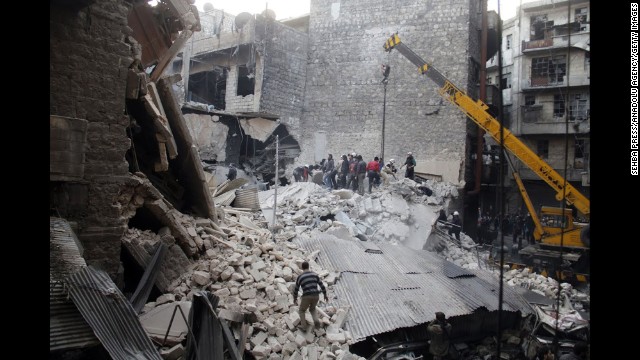 People dig through the rubble of a building in Damascus, Syria, that was allegedly hit by government airstrikes on Thursday, February 27. The United Nations estimates more than 100,000 people have been killed since the Syrian conflict beganin March 2011.
HIDE CAPTION
Syrian civil war in 2014

Raqqa was once one of the nation’s most liberal cities

(CNN) — Islamist militants have told Christians in a northern Syrian city that they will guarantee their safety. But there’s a catch.

Make that a lot of catches.

Christian residents of Raqqa, once one of the nation’s most liberal cities, will have to pay as much as 17 grams of gold per adult male in an annual payment, the extremist group the Islamic State of Iraq and Syria (ISIS) said in a statement posted online this week.

The group is also forbidding the city’s Christians from repairing or refurbishing their churches and monasteries, said the statement, which has been circulated in the city, according to Syrian activists.

The heavy restrictions are perhaps unsurprising coming from ISIS, which has broken away from al Qaeda and is fighting with other rebel groups in Syria.

Activists told CNN in November that Raqqa was becoming increasingly conservative after ISIS began imposing hardline Islamist law there and meting out harsh punishment to those who don’t follow orders.

Locals started calling the city Tora Bora and saying it felt as if the Taliban of Afghanistan had taken over.

ISIS’s new set of restrictions on Christians has drawn criticism from the Syrian opposition and even a radical Muslim cleric.

Louay Safi, a spokesman for the Syrian Coalition, said ISIS’s treatment of non-Muslims was un-Islamic.

And the radical cleric, Abu Qatada, who is on trial in Jordan over terrorism charges, told CNN Arabic on Thursday that the militants didn’t have the right to offer protection and demand payment from Christians because they weren’t yet empowered to govern Syria.

It’s unclear how many Christians remain in Raqqa after years of bloody civil war in Syria.

Since ISIS began cracking down on dissent in Raqqa, many activists and residents have fled the city.

Other things the extremist group have forbidden Christians in Raqqa from doing include:

— Exposing crosses or their books to Muslims;

— Making any recitations or ringing any church bells that can be heard by Muslims;

— Trading pigs or alcohol to Muslims or in their markets;

@@metrolens1
Previous Ukraine crisis: Obama warns Russia against intervention
Next Making love is like food to me — Maheeda