The Gambia’s President Yayha Jammeh has returned to the country after a reported coup attempt, sources say.

Heavy gunfire was heard near the presidential palace in Banjul on Tuesday but officials say the military takeover was thwarted.

Details remain sketchy but Mr Jammeh, 49, said there had been an attempted invasion from neighbouring Senegal.

He seized power in the tiny West African nation in 1994, and is accused of not tolerating any opposition.

An official told the BBC that everything had now returned to normal.

A pro-opposition radio station says most businesses are closed, while the market in the biggest town, Serekunda, is deserted. 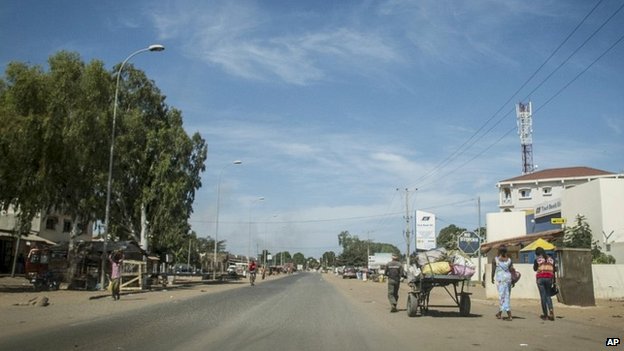 Banjul was reportedly deserted on Tuesday – and again on Wednesday

The pro-opposition Freedom newspaper reports that four people were killed, including the alleged ringleader Lamin Sanneh, a former head of the presidential guards, but this has not been confirmed.

Mr Jammeh was said to have been in either France or Dubai during Tuesday’s unrest but different sources agree he has now returned.

Who is Yayha Jammeh?

Accused of stamping out opposition

Claims to be able to cure HIV/Aids

He has won several elections since seizing power but critics say they were neither free nor fair.

Numerous officials and opposition leaders have fled the country, saying they fear for their lives.

Apart from a short Atlantic coast, The Gambia is entirely surrounded by Senegal.

Its main foreign currency earners are tourism and peanut exports.

The Department of the Treasury Office of Foreign Assets Control, in a coordinated action with …