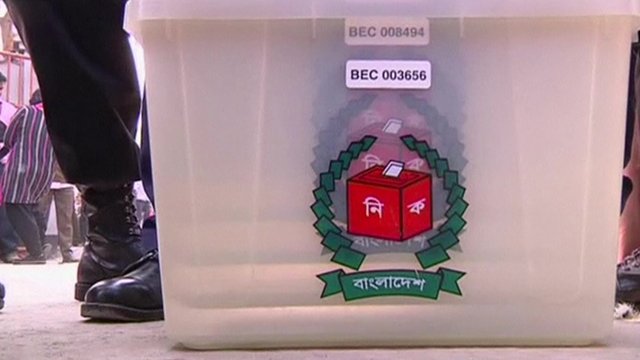 There have been violent clashes between opposition activists and police during Bangladesh’s general election, amid a boycott by the opposition.

At least 11 people were killed during Sunday’s polling. Dozens have died in the run-up to the election.

Scores of polling stations have been torched. Voting ended at 10:00 GMT and was said to be thin.

The opposition has boycotted the vote and called a two-day strike over what it termed a “scandalous farce”.

The trickle of voters never turned into the long queues Bangladeshi elections are known for. Voters who did turn up had no real choice, as the opposition was not taking part.

There was extra security at the few constituencies in Dhaka where voting did take place. But in more remote areas the fear of attacks left voters wary. In some places election officials did not turn up till late. And with the outcome of these polls all but certain, many felt voting would be futile.

As Bangladeshis wait for the same faces from the last government to form the next one, their real concern will remain the violence. Legitimacy will be the ruling party’s biggest headache, at home and abroad. The election leaves the political crisis exactly where it was before voting started. The key to any possible dialogue between the two rival political camps will hinge on what has so far remained elusive – compromise.

Results are expected to come in during the early hours of Monday morning.

However, Prime Minister Sheikh Hasina’s Awami League is assured of victory, with government candidates already declared victors by default in many seats.

She had rejected opposition demands for her to step down and set up a neutral government to oversee the poll.

Widespread violence erupted across the country on Sunday.

In the opposition stronghold of Bogra, the police chief told AFP: “We’ve seen thousands of protesters attack polling booths and our personnel at a number of locations with Molotov cocktails.”

In Parbatipur, in the north, police chief Mokbul Hossain said: “We were forced to open fire after thousands of them attacked us with guns and small bombs.” 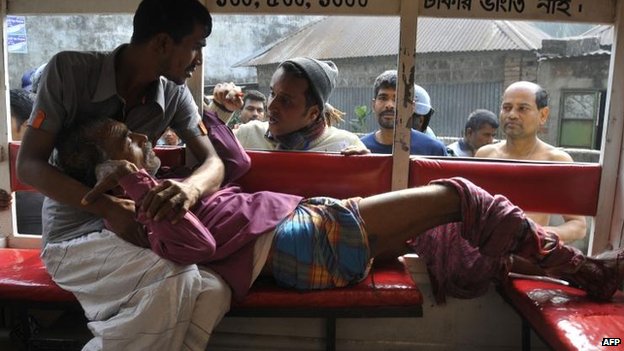 Voter injured by a crude bomb in Dhaka 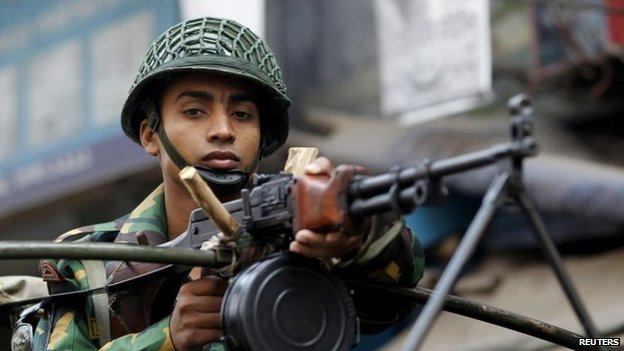 Security is tight across the country

Media reported that more than 100 polling stations were torched overnight – adding to a similar number the night before.

We are incredibly frightened, we can’t live like this any more”

Saila, a resident of Gaibandha, told the BBC in an email: “None of my family or myself have gone to cast our vote amid fear and violence. What is happening here is a one-party election and 90% of Bangladeshis are against it. The polling centres are deserted.”

One polling station in Dhaka’s Mirpur district recorded only 25 ballots out of 24,000 registered voters in the first two hours, AP reported.

Security is tight, with some 50,000 troops reportedly deployed around the country for the election.

But the BBC’s Mahfuz Sadique in Dhaka says that, given the arson attacks and attempts to steal ballot papers and despite the heavy police presence, voters were wary about how secure they would be in coming to the polling stations.

The opposition Bangladesh National Party (BNP) began a nationwide 48-hour strike on Saturday a day after its leader Khaleda Zia urged supporters to “completely boycott” what she called a “scandalous farce” of an election. 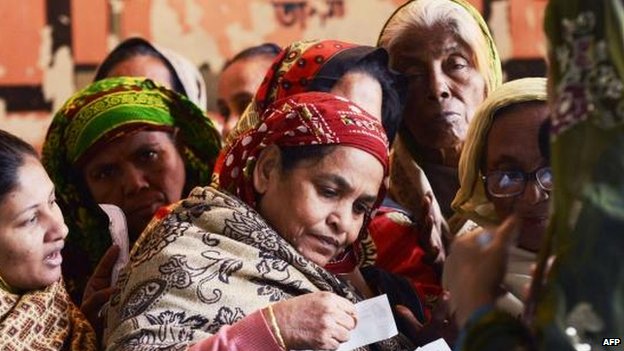 She accused the government of placing her under house arrest – something the authorities deny.

The two-day strike is only the latest in a string of protests by the BNP and its allies – including the Islamist Jamaat-e-Islami party – that has seen a blockade of roads, railways and waterways and the closure of shops, schools and offices.

In the run-up to the polls, scores of opposition supporters died in police shootings and dozens of commuters were burnt to death by protesters throwing petrol bombs at strike-defying buses.

All elections since 1991 have been held under a neutral caretaker administration to ensure that voting is not fixed.

But the Awami League abolished the caretaker system in 2010, arguing that it was no longer necessary.

The government has insisted the BNP should take part in the polls within the existing constitutional framework.

Sheikh Hasina and Khaleda Zia – who are bitter political enemies – have alternated from government to opposition for most of the past two decades.